Shooting Open is mental. In more way than one.

Had a great time shooting with our squad. I can admit that shooting with Nick (GM) definitely affects me mentally. Some stages I push myself too far trying to catch up to him but fail and bomb the stage, but when I take his performance as an inspiration and shoot to my abilities, I do well.

My gun is breaking apart

Looks like it’s time for stuff to start breaking down. I’ve been shooting over two years with the same gear, maybe only around 7,000-8,000 rounds total without any issues until recently. You’ve seen my problems with the cracked grip (due to loading 29rounds in my magazine) and a cracked c-more scope mount (material taken off from the mount). Most recently during the Paul Bunyan match where Arrun and I switched guns, the c-more dot kept turning off during the match. I discovered that the pin for the dot module had broken off. 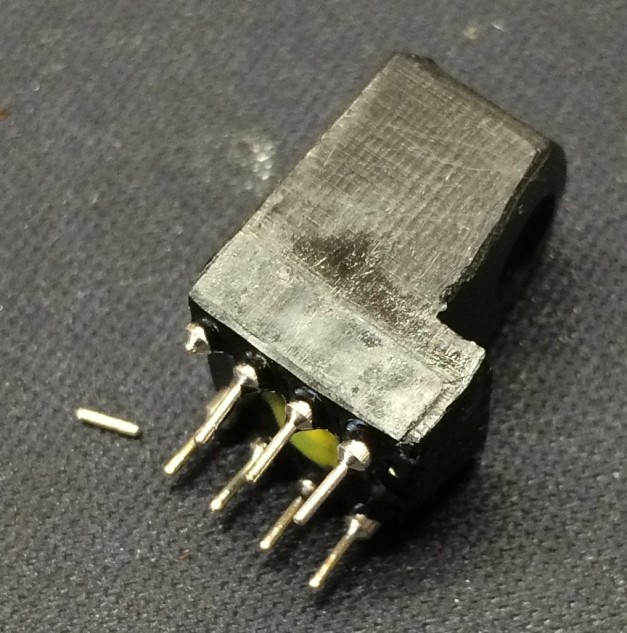 As you can see from the image, the pin remained in the c-more base. We didn’t have any tools to remove it at the range so we tried to maintain the electrical connection by using a small piece of metal from a paper clip, that didn’t work.

Dennis, who’s a resourceful tinkerer and home gunsmith suggested we use a more robust and reliable fix using aluminum foil as it’s more “flexible” so during recoil, the aluminum foil can still flex and maintain connectivity, unlike a hard paper clip.

We also added some foil to the hood of the c-more dot cover to hold the module down to maintain the connection to the foil.

This solution worked out well and Arrun was able to finish the final two stages without any problems from the dot.

Looks like I have to find a new replacement dot module, or better yet, find a replacement c-more sight. I’m holding out for a chance at one of the cool new prototype sights that a local shooter has developed but am still unsure how long it would take to get it. For now, I’ve replaced the dot module with a new 8-MOA dot. Hope this will last me for a few more matches.

Arrun and I decided to switch divisions for one match. He’ll shoot my Open gun and I’ll shoot his Glock 17 in Production Minor. Everything went well except for when my c-more red-dot module broke one of it’s “pins”. Wasn’t sure why it broke but it worked intermittently and Arrun had a hard time shooting it. We finally figured it out later in the match by using a small ball of aluminum foil to maintain the contact points.

Apart from that, I had a blast shooting production, that front sight is easy to find but aligning the rear sight is a chore. I’ll stick with Open for a while more.

Another Crack! (in the C-More Mount)

Just discovered another crack, this time on the C-More Serendipity red-dot that I have on the gun. 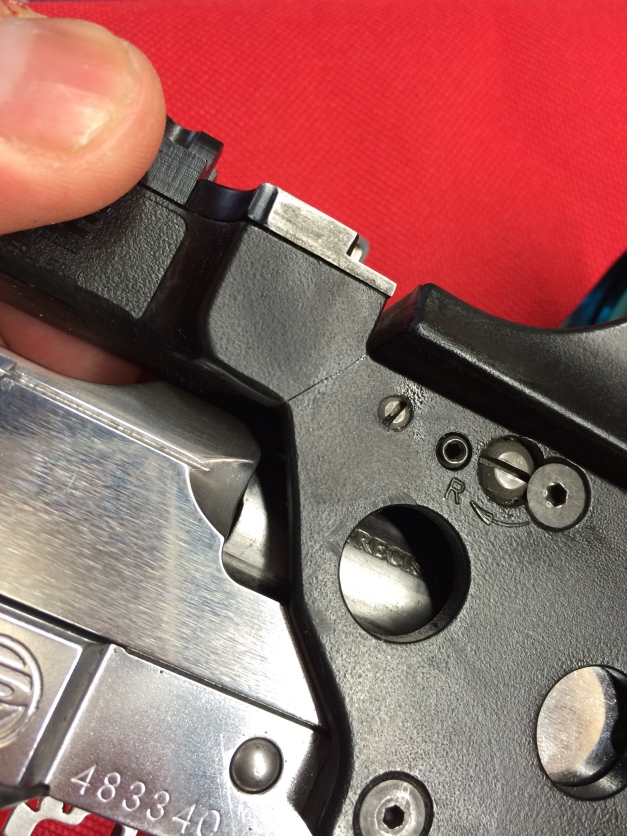 you can see the previous owner cut down the mount a little to ease with extraction but after John worked on the gun, that cut was unnecessary. Guess I’ll have to get a new red-dot. 😦

After the Area 1 Championships in Eastern Washington, I discovered a small crack on the plastic SVI grip of my Open Gun. This is from loading to 29 rounds in my 170mm magazines and shoving it into a gun with one round in the chamber. This repeated stress led to this infamous crack in the grip right at the mag release button.

Luckily my gunsmith JPL (http://www.jplprecision.com) has a stock STI plastic grip. Took it home and made the necessary modifications to the magwell to remove excess plastic and make the funnel smooth…

Also took the opportunity to cut two finger grooves under the trigger guard to get a higher purchase on the gun and smoothen out the edges just above the mag release button hole. This is so that my fingers won’t be bruised by a sharp edge. 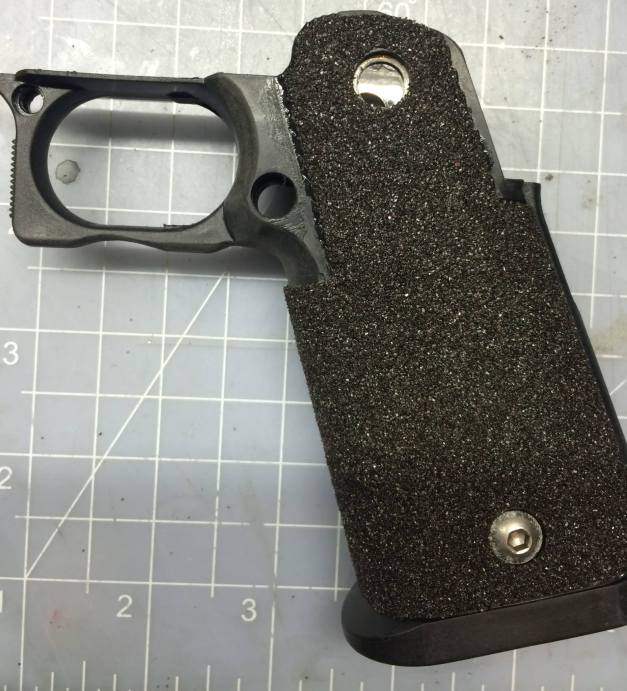 There we go, all done and back together again. 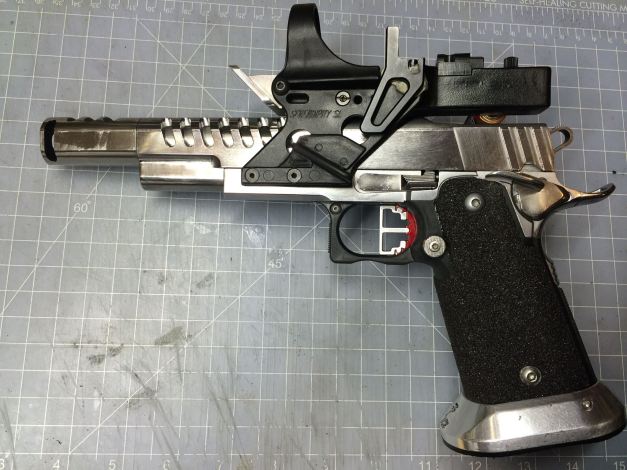