When I took apart my Ruger 10/22 Takedown that I showed in the last post, and looked at the internals, not only were they filthy, the bolt and receiver was not polished and had a very rough metal finish.

So I took my polishing stone to the bolt, firing pin and receiver to make them shiny and smooth. Seen here, the bolt on an india stone.

forgot to take pics of the polished receiver but here are the bolt and firing pin.

Should make the action much smoother now.

I’ve been suffering from light primer strikes recently shooting my reloaded ammo using Wolf primers through my 625 JM. This is a very widely known issue with the revolvers and most of the competition revolver shooters today suggest that I use Federal Primers instead of others because Federal makes very “soft” primers which are very revolver friendly. Using properly seated Federal primers, some gunsmiths will be able to reduce the Double Action trigger pull from 11lbs to 5-6lbs. A HUGE difference in double action smoothness and speed. One day I’ll get that done for my 625 but for now, I’ll settle with using the Cylinder & Slide Extra Length firing pin.

This will aid me in getting a solid strike on the primer. I’ll try this out with my existing Wolf ammo to see any difference. Once my Federal primers arrive, I’ll reload special ammo using Federal primers for the revolver.

Here’s my revolver disassembled and ready to swap the firing pin : 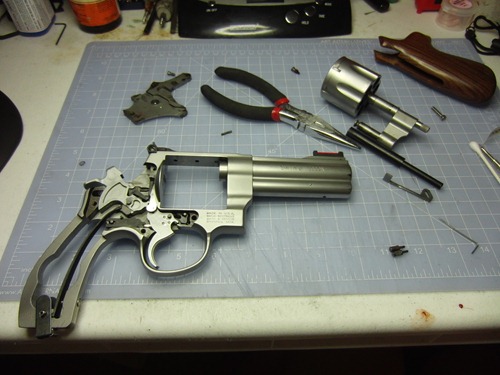 took me a while to figure out where to put the trigger safety bar when I reassembled it back together again. It’s useless, but because I shoot IDPA, I have to keep it in the gun.

Here’s a good comparison between the stock firing pin (above) and the C&S Extra Length firing pin (bottom) : 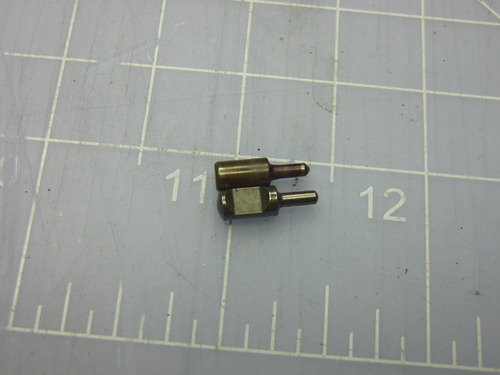 and the Extra Length one :

As you can see, although it’s just a tad longer, it should make a difference. It’s also REQUIRED that you use SnapCaps during Dry fire. I still cannot figure out why but I guess because the extra length’s firing pin “channel” (where the small pin holds it in place) is longer, letting the hammer drop on it without a SnapCap will cause either i) the back part of the firing pin to slam into the retaining pin, or ii) the front of the firing pin slamming into the frame.

The sound is also very different because now the firing pin hits the SnapCap and “rebounds” a little. How well will this perform? i don’t have a clue until I go to the range to fire off a few rounds. I’ll keep everyone posted.

Shot a classifier match today and came back home to clean the gun, decided to detail strip it for a thorough cleaning. I haven’t done this since I bought the gun 10months ago.

OMG! That thing is frigging dirty! Why haven’t I done this before? I’ve clean by gun after every time I shoot it and look at how dirty it is on the inside: 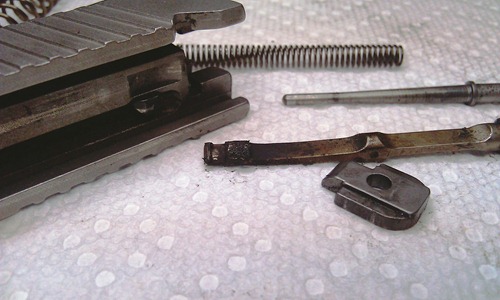 The Sear and disconnector:

After removing the Sear, Disconnector and Firing pin block lifter:

The trigger is super dirty. eesh!

Look how grimy the inside is :

Even the small area under the leaf spring is full of lint :

Gross. I’ve since cleaned the entire gun and feel so much better. If you haven’t detailed stripped your 1911, you should do it right now!